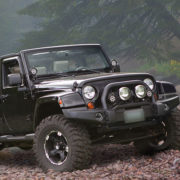 Lighting is essential when driving a jeep at night, but it’s especially important when going off-road. These activities include camping, driving over rugged terrain and splashing across muddy trails, all of which require more lighting than a jeep normally has. Halogen and high-intensity discharge (HID) lights have traditionally been the only choices for vehicle lighting, but LED technology has recently become sufficiently advanced to be a competitive choice for this type of lighting. The best choice of LED lighting for jeeps depends on the specific application among other factors.

LED lights last much longer than halogen or HID lights, which is a particular advantage when going off-road. LED lights typically last about 30,000 hours, whereas a halogen light only lasts about 1,000 hours. Furthermore, traditional light bulbs fail catastrophically, meaning they stop working completely without warning. In comparison, LED lights just get dimmer gradually. This difference means that LED lights are also safer, since they won’t suddenly go out while you’re off-roading.

LED lights are more energy efficient than other methods, which means they don’t drain batteries as quickly. This benefit is especially important for off-roading, where a service station can be a significant distance away. The increased efficiency of LED lights also means they don’t generate as much heat, making them safer to use than halogen bulbs. This advantage is particularly helpful in harsh operating conditions with a lot of dust in the air.

LED lights are also more environmentally friendly than other lighting technologies. They can be recycled more easily and are less toxic than both halogen and HID bulbs.

LED lights may generally be classified into flood lights, spot lights and light bars, each of which has specific uses for jeeps and other vehicles.

A flood light often has a large square shape and the LEDs are typically surrounded by a reflector cup that helps to concentrate the light they produce. They usually have a 60-degree field of vision with an adjustable mounting bracket that provides about 45 degrees of motion. LED flood lights are designed to provide strong illumination over a wide area, so you can use them to light camp sites.

Spot lights are usually smaller than a flood light and are intended to produce a concentrated beam of light that extends further than the other types of LED lights for jeeps. An adjustable mounting bracket on an LED spot light should provide a great degree of control over where the beam is pointed. Spotlights are typically used to illuminate a specific object, although you can also use them as fog lamps.

A light bar is a set of individual LEDs housed in a single package. They’re so named because the LEDs are typically arranged in a single row, giving them a long rectangular shape. The lighting characteristics of light bars are between those of flood lights and spot lights, so they provide a broad, clear view of the road ahead. They also have a long illumination distance, so you’ll have fewer surprises when off-roading at night. Like other forms of LED lighting, light bars for jeeps should have an adjustable mounting made of anti-corrosive material.

A jeep doesn’t need an LED light as large as other off-roading vehicles such as a truck, which means the cost will generally be less. A smaller LED light also has more mounting options than a larger model. Light bars are more versatile than other types, since you can often configure them as flood or spot lights. This capability makes it easier to transition between day and night driving, which requires illumination with a greater range.

Legal requirements are another important consideration for using LED lights, which can vary greatly between states. Generally speaking, however, the use of LED lights for off-roading purposes is much less restrictive than it is for regular driving. Check the laws in your jurisdiction to ensure you comply with local laws before purchasing LED lights for your jeep.

Hamsar is a Methode Electronics Company that has been designing and manufacturing custom lighting and other electronics for over 30 years. We specialize in vehicle lighting, including LED off-road lights, fog lights and light bars. Hamsar has lighting solutions that meet the budget and other requirements of any Jeep enthusiast. Contact us today to learn more about our LED products.